Are Your Neighbors Friend or Foe? 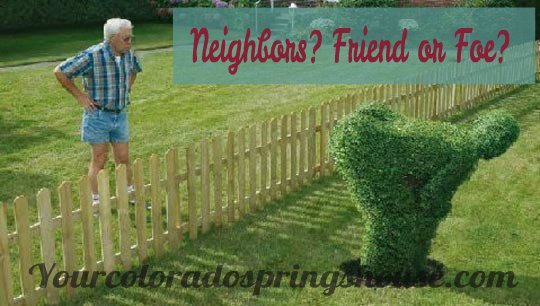 Neighbors wage war every day over blocked views, loud noise, big and small annoyances. Do you have a good neighbor policy? How’s it working out?

File this under No Good Deed Goes Unpunished: A Buffalo home owner sued her neighbors for cleaning up her littered patio without her permission. She said they trespassed and discriminated against her. A federal judge disagreed, and forced her to pay $107,000 in attorney fees.

I’ve been a home owner for 27 years and can think of no greater hell than waging war with neighbors. The idea of scurrying to collect my mail so I’ll avoid an angry couple next door makes me want to down a Xanax.

So what do I do? I usually bend over backwards to keep the peace.

Once, I hacked off the tops of my sunflowers because my neighbor complained they blocked the sun from shining on her tomatoes.

For the past two summers, I’ve allowed a twangy lute to drown out summer crickets because another neighbor adds a mid-eastern soundtrack to his nightly pool parties.

And I let it go when the couple across the street snuck into my yard and pruned my willow because they thought it blocked traffic sight lines around the corner.

But I may be in the minority. These days, it seems like neighbor feuds are the rule, not the exception.

Can’t we all just get along, or at least get some perspective?

I’m not saying hack off sunflowers to avoid a fight — that just worked for me, and my flower-loving neighbor felt guilty for years. But some honest communication, or perhaps a little mediation, could keep your front yard from becoming a battleground.

Have you ever confronted a neighbor? How’d it turn out?

SOLD – Home For Sale Very Close To Fort Carson, Fountain
Where is your home value going in the future?